This post was originally published in the Creative Academic Magazine. Republished with permission.

In many ways it was a typical lockdown event. The audience had logged on to Zoom eager to see a show. The performers were ready to bring different worlds to life—from space junk to seaweed lingerie, from life in the NHS during Covid, to surviving child abuse—in various dramatic ways.

But those performing that night were not conventional actors but third-year journalism students from City University, taking part in a new research project looking at whether theatre can help reporters reconnect with the public and build back trust in the media.

In February 2020, my research partner Catherine Adams of Nottingham Trent University and I were about to start a project called News on Stage looking at the synergies between drama and journalism. At a time when trust in the media was falling, when local news was in crisis and when audiences seemed more distanced from news producers, we wondered whether this could be combatted by putting together journalists and audience. This would be done via events in which journalists revealed previously unpublished stories through a dramatic performance, and then directly interacted with their audience. We planned events and scoped out possible venues. And then the pandemic hit, all theatres and public spaces closed down. We couldn’t have had worse timing.

But in fact, the creative possibilities online started to work to our advantage, and we began to think about how we could still use performance via online platforms such as Zoom to explore the issues we’d identified—but also work directly with students to enhance their learning and challenge their thoughts around storytelling.

Theatre inspired by real-life events is not new — think of the ‘living newspaper’ movement in Soviet Russia and the American Federal Theatre Project as far back as the early 20th century, and the rise in verbatim theatre from the 1980s onwards. What is new is how news organisations have been engaging in live theatre performances, in which journalists themselves perform rather than just creating the work and then leading conversations with audiences following a theatre performance — for example Pop-Up magazine in the US, the Black Box project in Finland, De Balie in the Netherlands and the Creative Storytelling Workshop in South Africa. Could we persuade journalists and journalism students to take part in something similar in the UK?

While journalists and performers might not see themselves as natural bedfellows, they are closer than they think. Both journalists and artists use narrative forms and language to create representations of reality1 p44. Storytelling is hugely important in both forms. And as Postema and Deuze2 p1305 point out journalists and artists also share similarities in the precarious working conditions they operate within, as well as the motivations for the work that they do3 and disruption and challenges in their field. Journalism can thus be imagined as a created, creative space1.

And while it might be fairly obvious for onscreen broadcast journalists to see themselves as ‘performers’, producers, print and online journalists also ‘perform’ when interviewing or going about their tasks as a news or feature writer as well the ‘backstage’ work where the vital secrets of the illusion of the performance are constructed, maintained and held4 p53-55.

For our first event, Catherine worked with experienced freelance journalists around the country and a Zoom event was put on in June called Unrelated Stories which included reporters turned stand-up comedians, verbatim monologues about warlords and the use of Dungeons and Dragons in lockdown. I decided to try to persuade our journalism students to take part in a similar event.

The obstacles were clear. In 2020, our final year students had already suffered huge disruption to the last year of their degree – and also they wouldn’t gain any extra marks for taking part. They were graduating at a time when jobs in the industry were thin on the ground, and needed to dedicate time to finding work. And there was no precedent for doing an event like this. On the plus side, however, when many were isolated, stuck back at home, and didn’t have jobs, it was something creative for them to engage with. And because we had moved online, we could arrange rehearsals with myself, our theatrical director and the students far more easily.

I put out the call via the third-year group email—and five stepped forward, with little idea of what I was asking—to turn their final-year journalism project, previously written in print form, online or as a pre-recorded broadcast piece—into a short piece of live theatre.

The process worked as follows: first, the students and I had individual meetings talking through their project and what aspect of that might make a seven-minute scripted piece. This might—and quite often wasn’t—the main focus of their original work. For example, one student who had investigated space law considered looking at the commercialisation of space travel, before focusing in on Lottie Williams, a woman who’d been hit by space junk, and how she would go around suing over this (this turned into a How to Get Away with Murder style piece).

The key rule that Catherine and I had was that the journalism was paramount—our motto was ‘never let good drama get in the way of the facts’. The stories performed had to be as rigorously sourced as a conventionally written news story or news broadcast would have been. 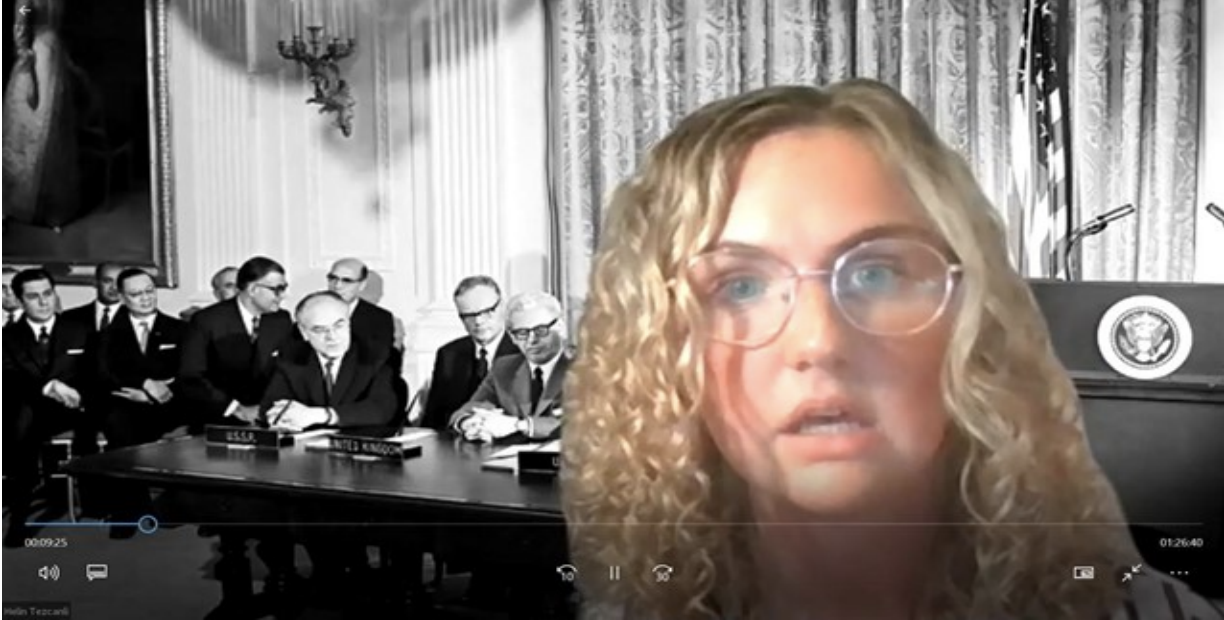 Space to think: one student dramatising the complex history of space law

Experimenting with different forms took more time. Here, I was helped by two things: first a theatrical director, Leo Hatton, who generously worked with the students. And second the open-mindedness and willingness to experiment that the students themselves showed. So, for example, a student who investigated the closure of an A&E department came up with the idea of getting the audience to vote in Zoom polls on which A&E to send a patient to – like a gameshow - but then worked with Leo to develop a soundscape that would help the audience immerse themselves in that scenario. Another student who’d looked at compassionate fashion filmed herself IGTV style in various fashion outfits. A couple of further pieces turned into verbatim theatre – an adaptation of a feature about an NHS radiologist became a monologue, while another student, who had done an investigation into survivors of child abuse, got in contact with his interviewee, and then re-conducted the interview for the event itself. 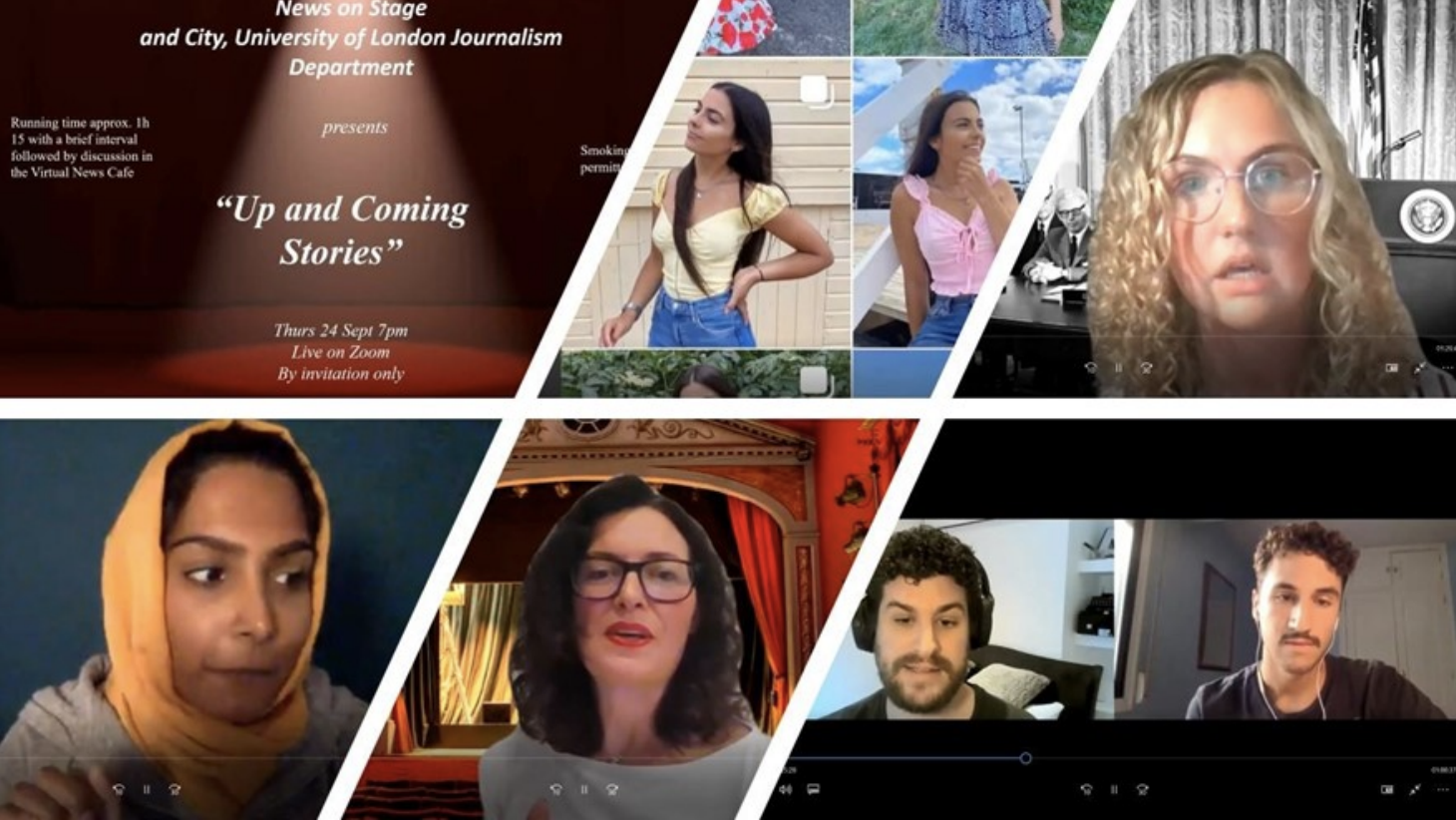 The live event: scenes from the Up and Coming Stories event

The event, a Zoom webinar, was planned for Welcome Week, to give our new first years a chance to feel part of the City journalism department and experience more senior students’ work. We invited not only the incoming first years but the City journalism department, journalists and creative practitioners interested in this area. In between the students’ scripted pieces there was a chance for the audience to ask questions. Added to that, in the ‘interval’ there was a live poll asking people about their media use, and at the end a ‘Virtual News Café’ where the audience could interact with the student journalists in a less formal and more conversational way.

What did we learn from it? For the students, thinking about their stories as a performative act gave them the chance to think about novel ways of storytelling which will become increasingly important as the mainstream media seeks to engage new audiences. It made them think about how every word counts when a live audience can lose interest at any time.

And by taking part in a live event where the audience could ask questions, it helped break down barriers and increased a sense of trust in the journalistic process that has been lost as local news has retreated. The ethical questions that we often discuss in media theory classes were being experienced live.

What else did we learn? First, the fact that this is a time-intensive process. Leo and I had a succession of Zoom calls, not only to hone the scripts but also to work on the performance of the students. Second, working with someone who was theatrically trained was important for the students because it gave the process credibility; to do this on a regular basis would have a financial implication. Third, there was still the need for signposting clearly between journalism and performance; in one piece we could have made it clearer that the student was playing a role from the start of their presentation.

From a pedagogical point of view, it was clear it taught students to hone their writing skills and consider their audience. It asked them to engage with the ethics of how all journalism involves choices in which angles to take.

As a result, Catherine and I have gone on to work with a playwright to bring drama and role play into modules at Nottingham Trent and City, and are developing more toolkits that can bring the skills that drama offers to our journalism students. We just look forward to the day when we can do this face-to-face, as well as via Zoom…

If you are interested in finding out more about News on Stage, want us to bring it to your university or even just fund us please go to https://newsonstage964645559.wordpress.com/. Or contact Dr Glenda Cooper (Glenda.cooper.1@city.ac.uk) or Catherine Adams (Catherine.adams@ntu.ac.uk)