The Perugia International Journalism Festival resumed this April, after a two-year break. I was fortunate enough to participate in a panel on artist-journalist collaborations with Alison Killing, Surya Mattu and Ivan Sigal, moderated by Marisa Katz. We had all worked with publications to make art, write stories, and to provide artists with a space to voice their distinctive viewpoints on world events and urgent issues.

You can watch the video of the full panel on the IJF website, and read more about the projects here. Below are the speaker notes for my prepared remarks.

Six years ago, I made the Uber Game with a team of colleagues at the Financial Times. The Uber Game is a newsgame where you play as a full time Uber driver trying to make a living in San Francisco. 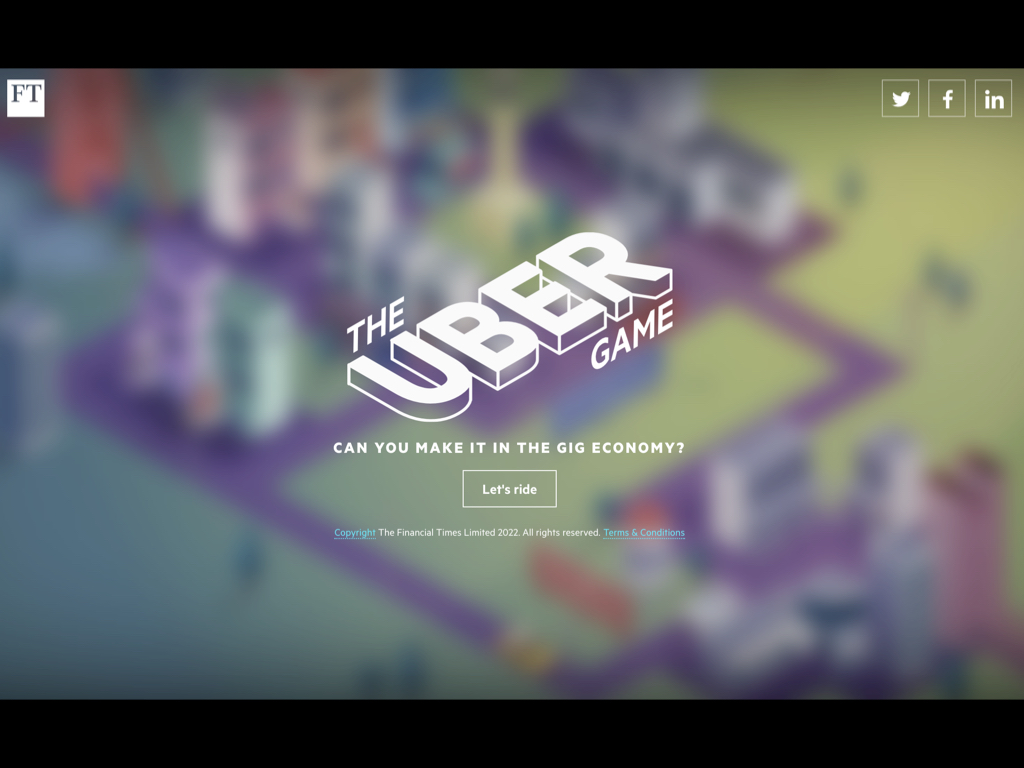 With the Uber Game, I wanted to bring game design techniques to bring to life and make more impactful the lives of Uber drivers, which sometimes gets lost in the course of business reporting.

The game was incredibly popular, with more than half a million people having played it since it was published. In making it, I realised that game design techniques were really just one mode or one way of designing a narrative experience, and there are many other fields that journalists can learn from, and draw from, to create these kinds of impactful narrative experiences. 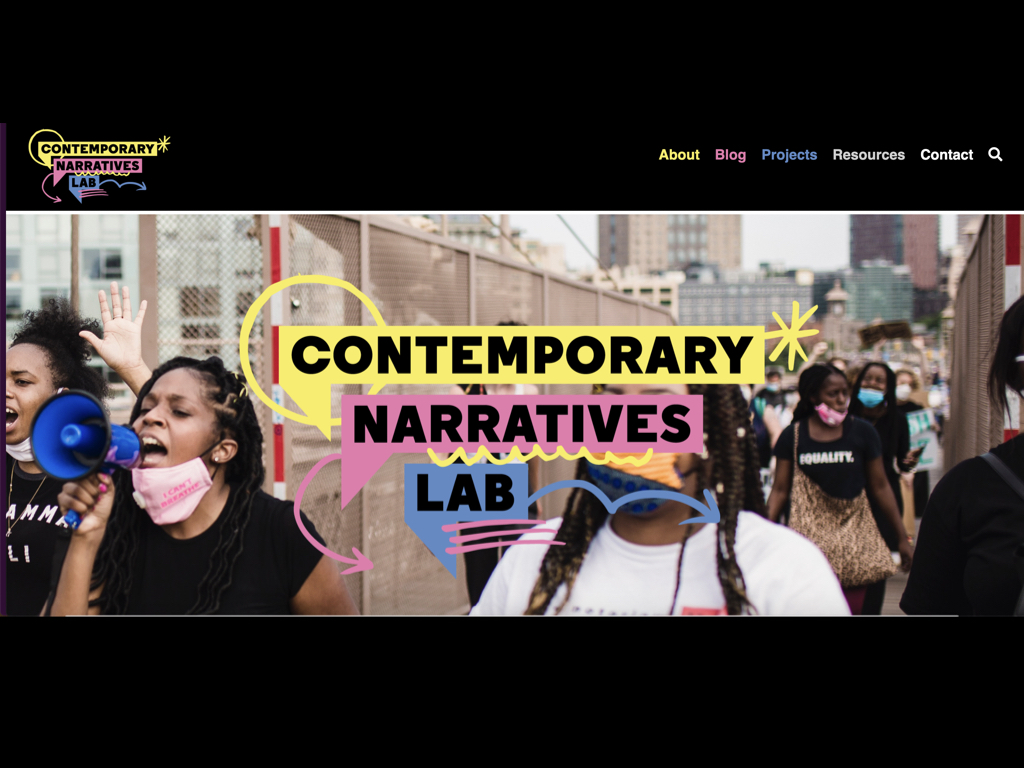 So, soon afterwards, I started Contemporary Narratives Lab with Andre Piza, a theatre director and journalist from Brazil, and we were joined by Professor Glenda Cooper of City University. We created CNL as space for all 3 of us to explore this intersection between art and journalism.

Our first project happened about a year later, after we got a bit of funding. For this pilot project, we paired five groups of artists with Financial Times journalists and their stories. They only had five days to work together, and we specifically told them that we wanted them to create new work - the articles are meant to only be a jumping off point. 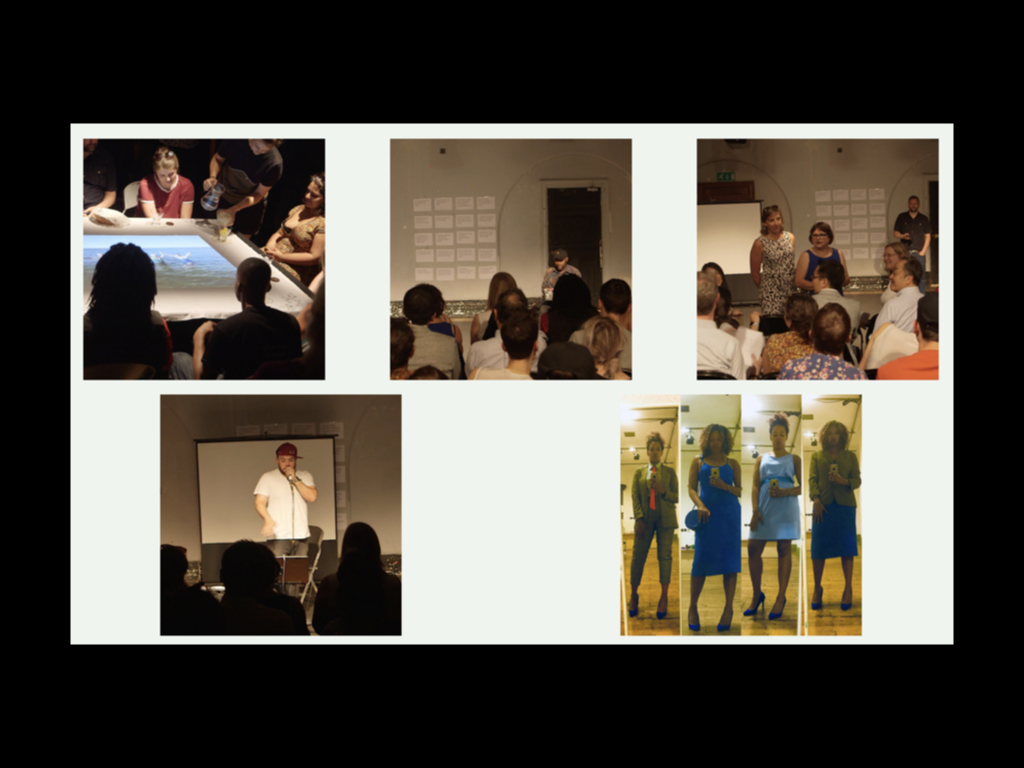 At the end of five days, we all got back together and put together a live scratch performance for a small audience at the Battersea Arts Centre in London. This was really encouraging because of the wide range and diversity of performances that came out of the partnerships.

But it also highlighted a shortcoming of this short period of engagement. There is only a limited amount that can be done in a weeks’ time. So for our second project, we decided to do a longer engagement. We got some additional funding, and this time there was just one artist-journalist pairing. 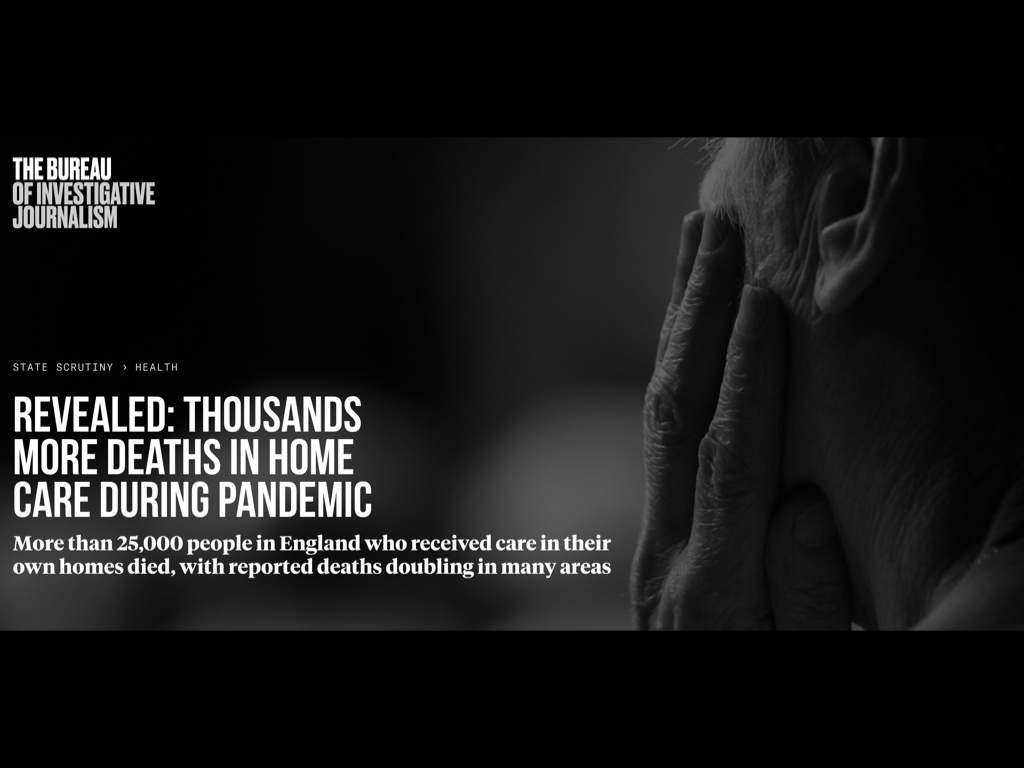 We partnered Coney, who are interactive theatre-makers, with reporters on the health inequality team at the Bureau of Investigative Journalism’s Bureau Local arm.

We paired up the artist and journalist for ten weeks - it actually ended up being longer because of the pandemic, and this meant that the artist was able to create intermediate pieces of work, and respond to what the Bureau was doing journalistically. 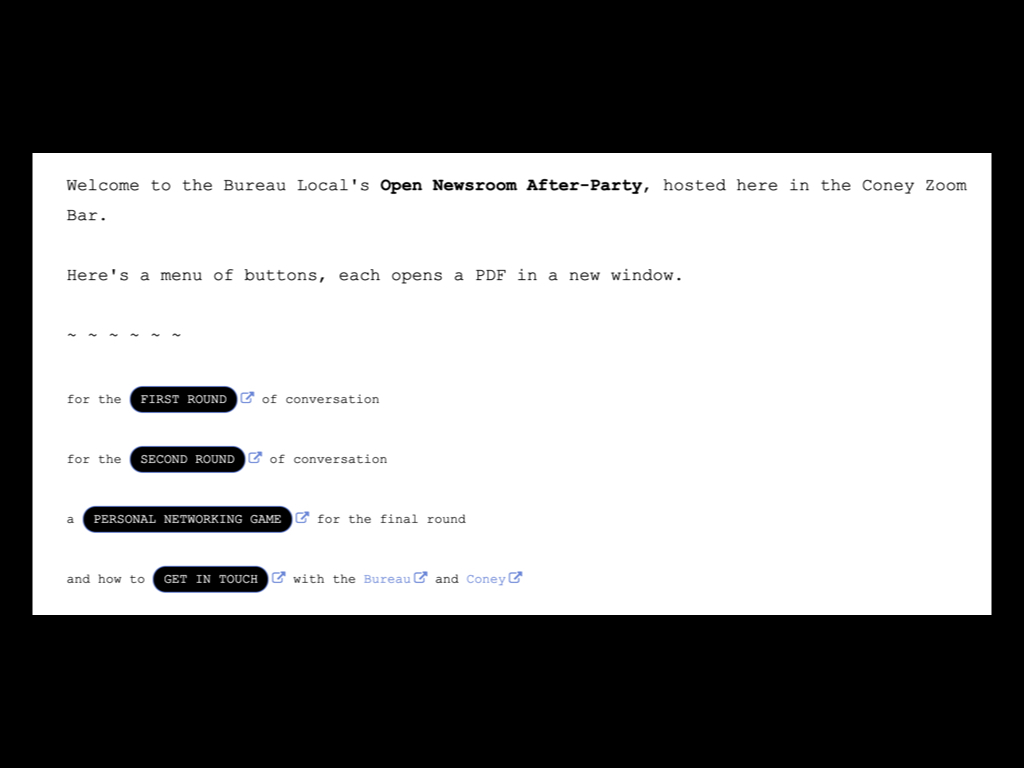 This image doesn’t look like much but this was a guided interactive discussion that Coney designed to accompany an Open Newsroom event put on by the Bureau. The audio from that actually ended up feeding into the final piece created by Coney, so there was an iterative feedback to the process that wasn’t possible in the first pilot. 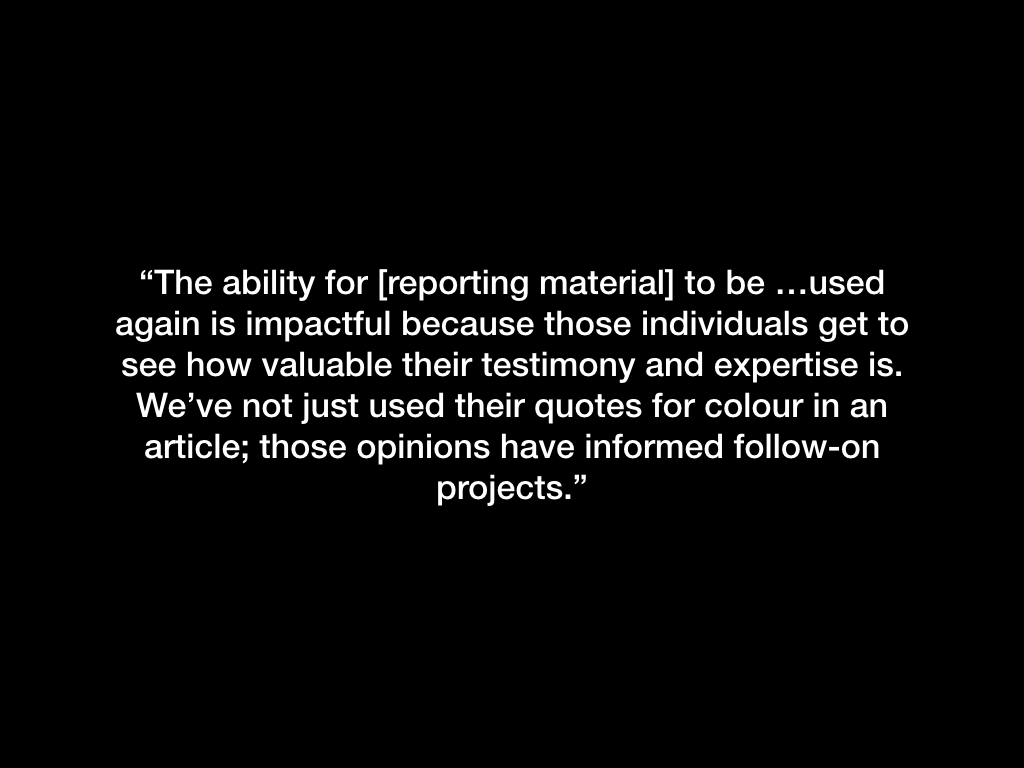 The above quote is from a reporter at the Bureau, and it highlights one of the benefits of this collaboration, and of the idea of ‘re-using’ journalistic material in artistic ways. For me personally, it also highlights the area that I’m increasingly interested in, and which we are trying to facilitate at the Contemporary Narratives Lab: it’s not just about an artist-journalist collaboration, but rather it’s figuring out how artist, journalist, and members of the public can come together to co-create, and how we, as journalists, and work with people from other disciplines to create space for civic conversations that are fact-based.

The last thing I want to show, which I was not invovled in at all but brings me great encouragement, is this project from Talk Media and Adam Chen in Toronto. 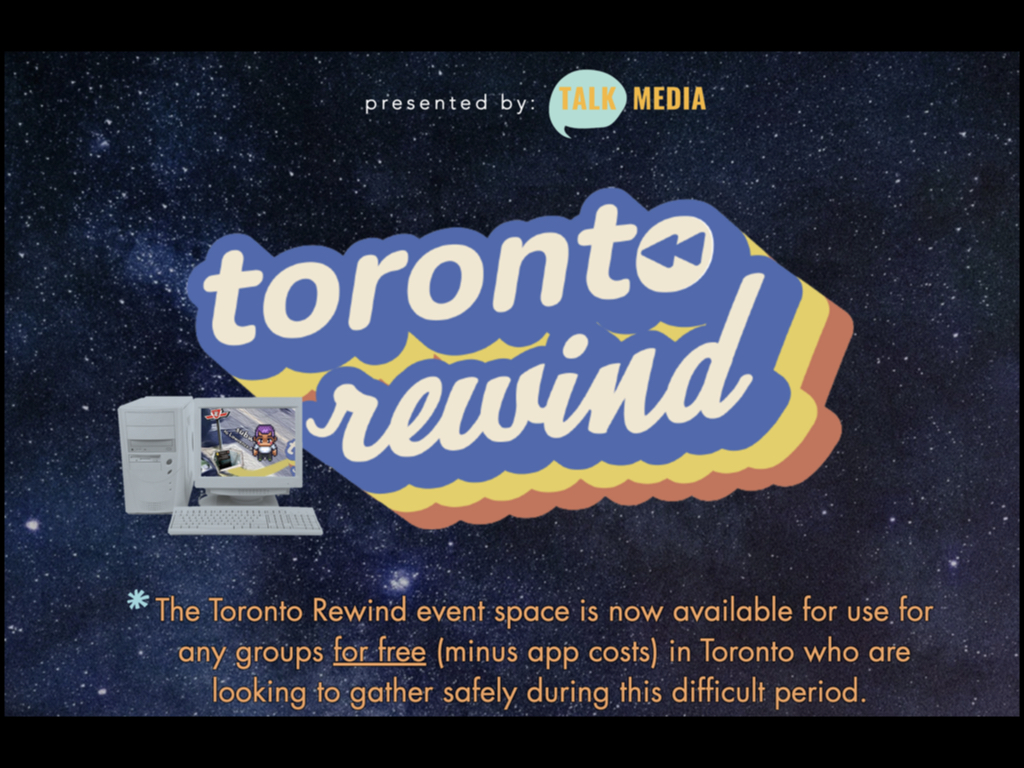 For the Toronto Rewind festival last October, Adam and his team worked with residents and other news media in Toronto to create an interactive, massively-multiplayer, online exhibition space in Gather that was open for a week. Audience were able to create their own avatar and explore the exhibition space and the stories being told there in an ‘immersive’ way. 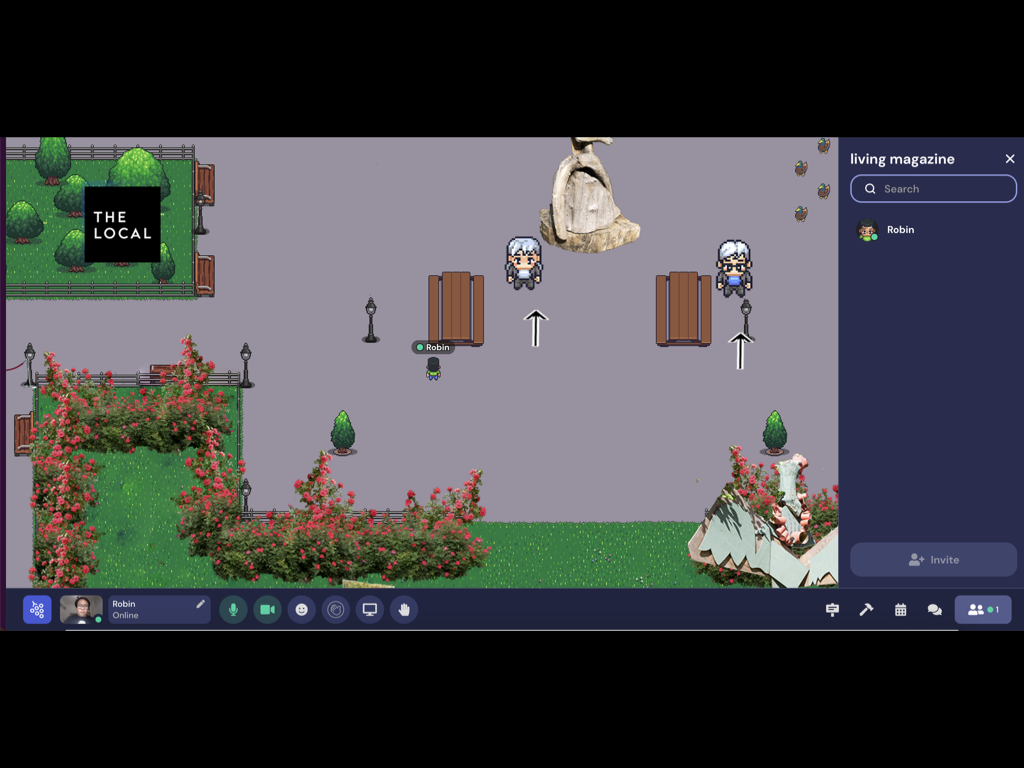 This is particularly exciting because it shows that some of this work can be done in an entirely digital way and that technology is creating new opportunities for us to do these collaborations and open up these spaces.

I’m definitely looking forward to ‘playing’ more in this area.

Interactivity is not (the) objective

Avoiding the pitfalls of partnership