Toronto Rewind is an interactive online festival that took place in November and December 2021. Using the Gather app, it brought participants into the heart of six unique stories that offer new perspectives on people, places and events from Toronto’s past, told by local journalists and storytellers. 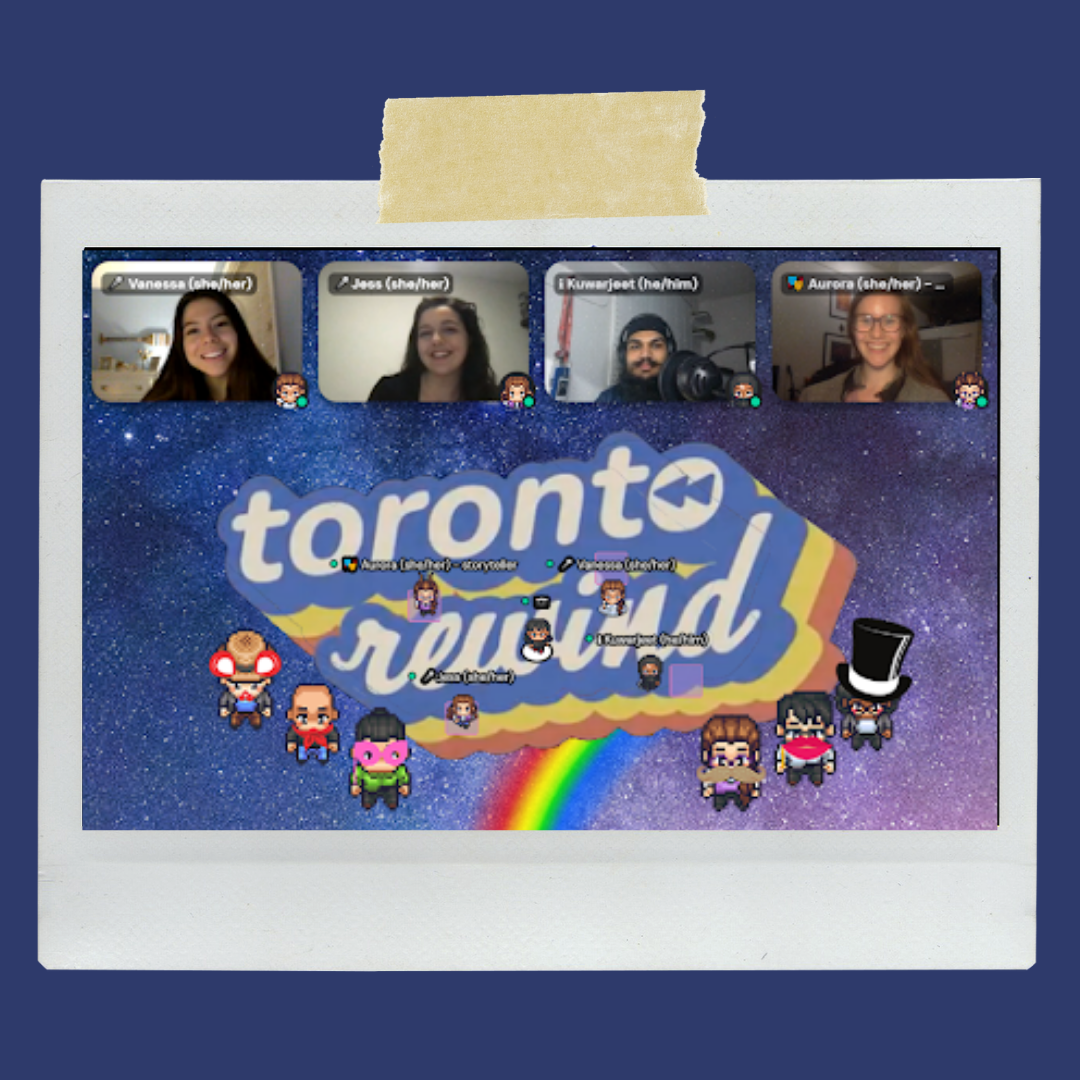 Toronto Rewind was created by Talk Media, a group of Toronto-based “journalists and tinkerers experimenting with non-fiction storytelling that brings you out of the echo chamber”, with editorial partners West End Phoenix, The Local, Living Hyphen and The Town.

We spoke to Adam Chen, founder of Talk Media, about the project, how it came about, and lessons learned about fostering collaboration between artists and journalists.

What was the project about?

I remember a time when the internet wasn’t such a divisive place. Before boring endless zoom calls, before twitter arguments, before all the algorithm enhanced polarization. We wanted to make a place online where people can have a good time, while also engaging with journalism in a less hostile environment, so we made Toronto Rewind. It’s like Nuit Blanche meets your favourite video game as a kid.

We were a group of gamers, streamers, storytellers, designers and journalists, and we ended up making a 2.5 hour event, where you can have fun experiencing local Toronto based stories written by journalists. We partnered with local publications including The Local, West End Pheonix, and Living Hyphen, adapting their stories into interactive online exhibits and spaces to explore. To increase the level of immersion, we also sent a full story-telling package to participants in the mail, which included items that would connect to the stories hosted in the digital space. 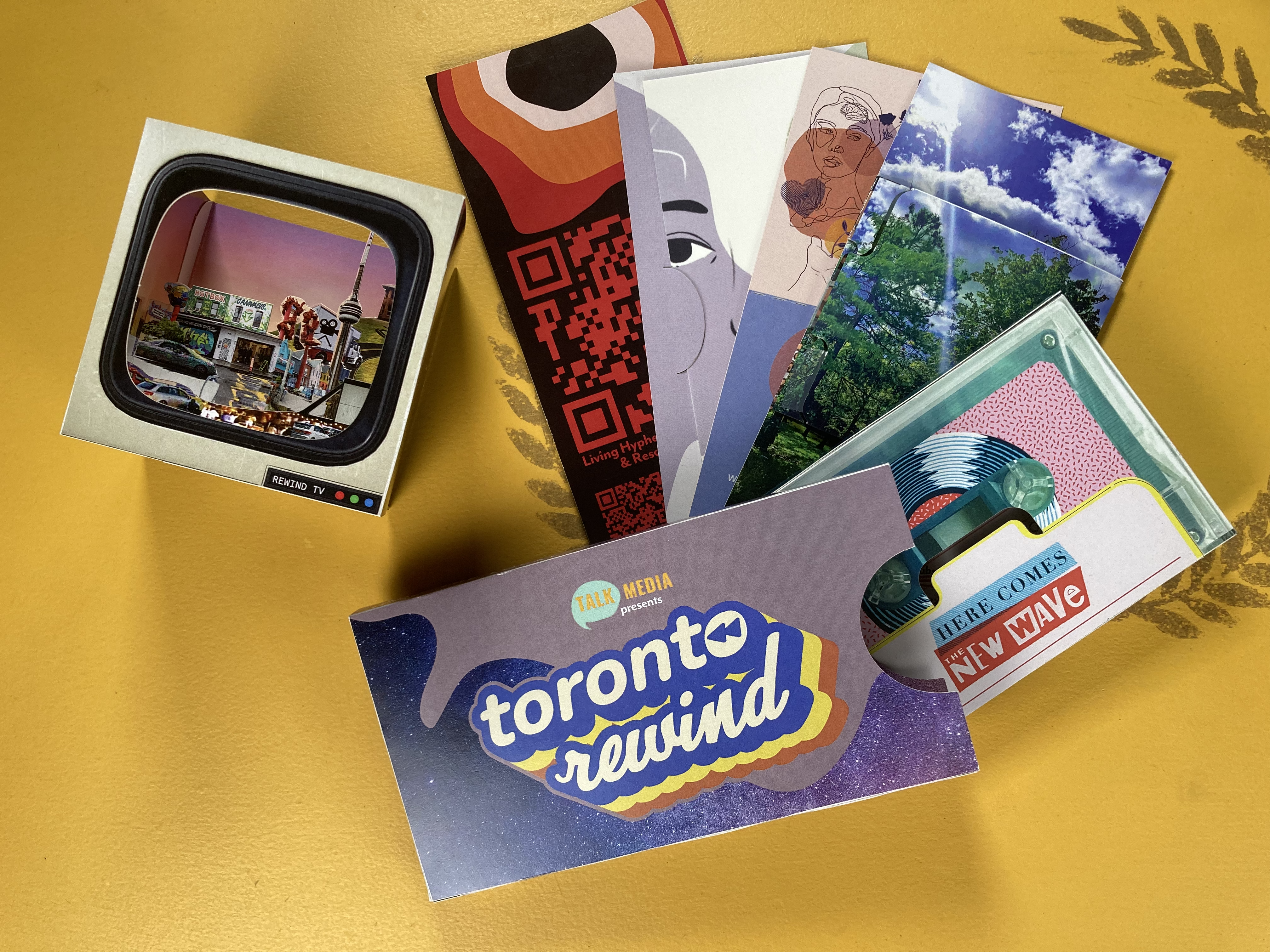 We were a team of people of different backgrounds who didn’t quite fit into traditional journalism - a raver, a business development specialist, interactive multimedia specialist, a product designer. Our whole goal was to bring citizens together in the city, so journalism doesn’t have to be something to read or look at, but something you can be involved in. I think local stories matter, but local experiences are something you remember.

We were about to put on an event for 100 people in an actual physical space. It was opening week, we were setting up lights, getting ready to put on our first ever event - and suddenly we had to spend a year sitting at home. It was crushing, but we didn’t want to lose the team, so we thought we could still create an event that people would remember and feel connected to.

We started by doing some live stream performances, but we found a strange sort of paradox: With online events, a live event is a passive event. When folks aren’t in an in-person audience, passive events can easily become boring, especially when combined with internet lag and a lack of social pressure stopping you from opening up new windows or looking at your phone. So in short, with online events, immersion equals interactivity. We realized that the most engaging platforms for folks at home were video games; things where people played a role and were called upon to be a part of it.

We weren’t video game developers, so we explored what interactive online platforms existed that we could use. We charted out the different interactive features on each one, and weighed them by other factors such as their accessibility to folks with varying levels of technology and internet access. We landed on Gather, which allowed for an abundance of interactive features we could use to experiment with telling our stories, while also having the feel of an in-person gathering. It was also primarily a web-based app, which made it more technically accessible for folks.

Tell me more about how the artist-journalist collaboration happened, or was facilitated?

We started by trying to find local publications that might be interested in seeing their stories developed in a new way, so we were able to bring on three different groups of folks who were interested in the idea of innovating storytelling and playing around. Then we went about bringing on the team members. We knew that we wanted to make a package that we could send to people in the mail, and interactive content that would deconstruct stories and present them in unique ways, and also foster a sense of community and feeling “welcomed”. So this led to us bringing on a product designer, community manager, and a graphic designer/editor.

How was the project funded?

The project was mainly funded through a gift from the Google News Initiative, which we received as graduates from the 2021 Google News Initiative Local Journalism Boot Camp. We also received subsidized salaries for students through one of the Toronto Metropolitan University business accelerator programs we’re a part of, The Social Ventures Zone.

How long did it take to produce?

All in all, it took about 6 months to put it all together leading up to the launch event, and included two pilot sessions.

What were some of the challenges?

Our biggest issue was trying to explain what it was to folks. It was hard to get people interested who otherwise were intimidated by more complex online experiences, when they were only used to events being live-streamed on Zoom or social media. A lot of folks thought it was a video game, which really narrows the audience. Additionally, the tech support needed to help people get their cameras and mics working was difficult. We tried to work through these issues by creating a video trailer and developing a relatively successful PR campaign, but it was still hard to get folks on-board. Managing the logistics of printing and mailing our interactive storytelling package complicated things further.

What was the most gratifying result?

The most gratifying part was seeing audience members continue to stay in the space well past the two-hour mark. We knew that once we got people through the door and past the technical issues, we had created an experience that led to folks learning about the city and meeting one another during a time when folks were dealing with immense issues of isolation and inactivity.

One crucial step for us is to not limit the storytelling to the stage. Through developing Toronto Rewind, we realized that everything can tell a story - whether it’s the front door or the mirror in the bathroom, there’s always a way to use your space to tell a story in a new way. 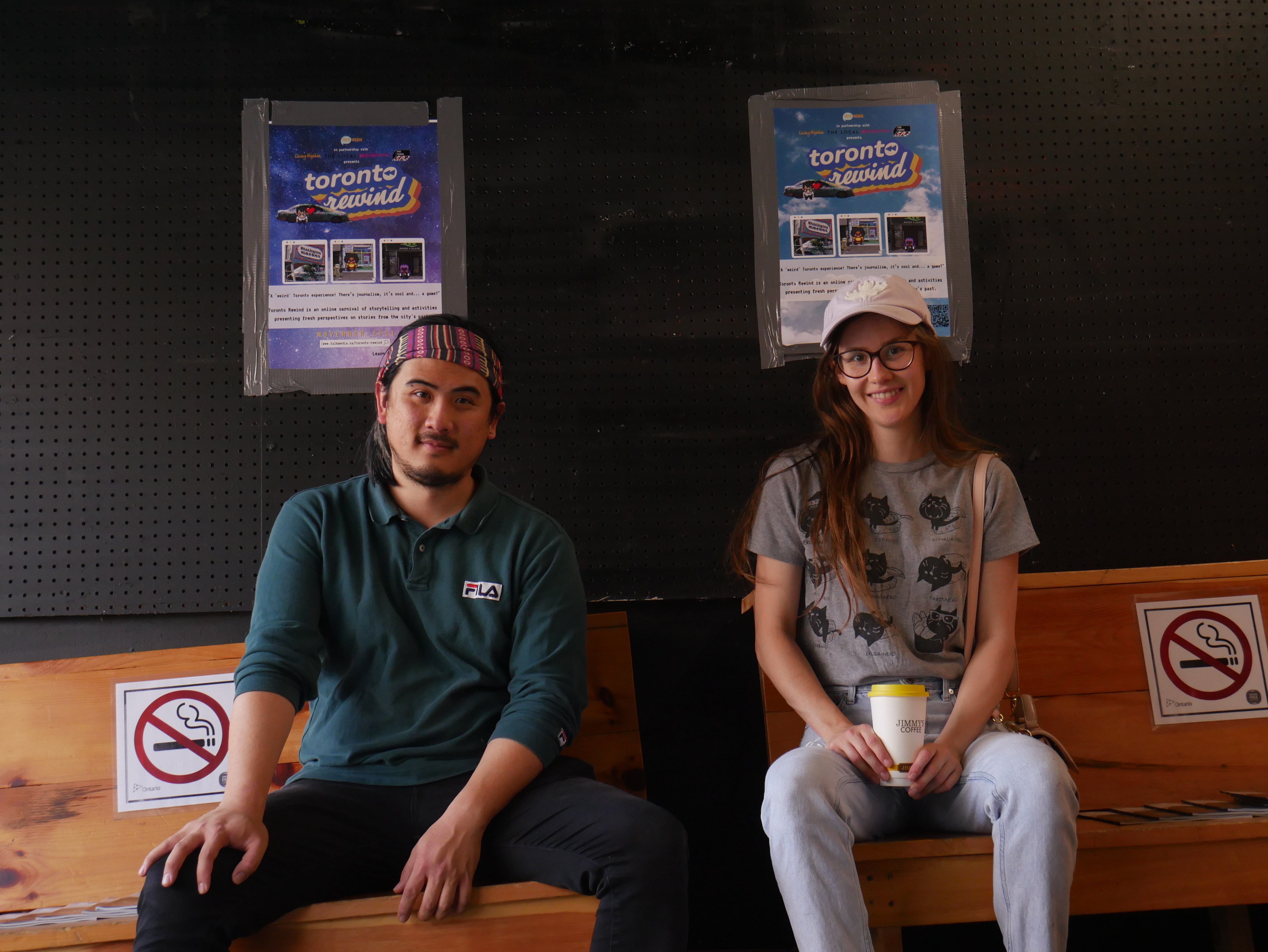 Talk Media team members Adam Chen and Aurora Zboch sit down in Toronto's Kensington Market (which is featured in a story by Zboch in Toronto Rewind), where they put up posters about the event at local businesses and cafes. Photo credit: Marie Lola Minimo

Interactivity is not (the) objective